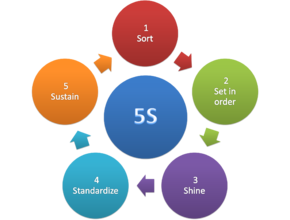 5S is a workplace organization method that uses a list of five Japanese words: seiri (整理), seiton (整頓), seisō (清掃), seiketsu (清潔), and shitsuke (躾). These have been translated as "sort", "set in order", "shine", "standardize", and "sustain".[1] The list describes how to organize a work space for efficiency and effectiveness by identifying and storing the items used, maintaining the area and items, and sustaining the new organizational system. The decision-making process usually comes from a dialogue about standardization, which builds understanding among employees of how they should do the work.

In some quarters, 5S has become 6S, the sixth element being safety (safe).[2]

Other than a specific stand-alone methodology, 5S is frequently viewed as an element of a broader construct known as visual control,[3] visual workplace,[4] or visual factory.[5][6] Under those (and similar) terminologies, Western companies were applying underlying concepts of 5S before publication, in English, of the formal 5S methodology. For example, a workplace-organization photo from Tennant Company (a Minneapolis-based manufacturer) quite similar to the one accompanying this article appeared in a manufacturing-management book in 1986.[7] 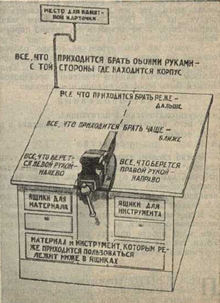 The scheme "Correct Arrangement of the Tool" from a USSR Central Institute of Labour instruction sheet, 1920-1924.

5S was developed in Japan and was identified as one of the techniques that enabled Just in Time manufacturing.[8]

Two major frameworks for understanding and applying 5S to business environments have arisen, one proposed by Osada, the other by Hiroyuki Hirano.[9][10] Hirano provided a structure to improve programs with a series of identifiable steps, each building on its predecessor. As noted by John Bicheno,[11] Toyota's adoption of the Hirano approach was '4S', with Seiton and Seiso combined.[verification needed]

Before this Japanese management framework, a similar "scientific management" was proposed by Alexey Gastev and the USSR Central Institute of Labour (CIT) in Moscow.[12]

There are five 5S phases. They can be translated to English as "sort", "set in order", "shine", "standardize", and "sustain". Other translations are possible. 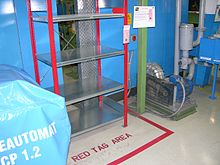 Seiri is sorting through all items in a location and removing all unnecessary items from the location. 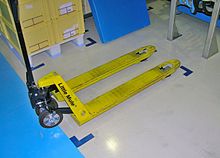 Seiton is putting all necessary items in the optimal place for fulfilling their function in the workplace. 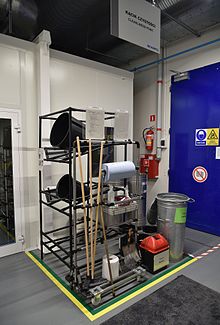 Seiso is sweeping or cleaning and inspecting the workplace, tools and machinery on a regular basis.

Seiketsu is to standardize the processes used to sort, order and clean the workplace. 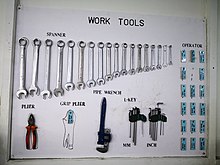 Shitsuke or sustain is the developed processes by self-discipline of the workers. Also translates as "do without being told".

5S methodology has expanded from manufacturing and is now being applied to a wide variety of industries including health care, education, and government. Visual management and 5S can be particularly beneficial in health care because a frantic search for supplies to treat an in-trouble patient (a chronic problem in health care) can have dire consequences.[13] Although the origins of the 5S methodology are in manufacturing,[14] it can also be applied to knowledge economy work, with information, software, or media in the place of physical product.

In lean product and process development

The output of engineering and design in a lean enterprise is information, the theory behind using 5S here is "Dirty, cluttered, or damaged surfaces attract the eye, which spends a fraction of a second trying to pull useful information from them every time we glance past. Old equipment hides the new equipment from the eye and forces people to ask which to use".[15]